Hello blog world. I'm back again for a new adventure to share with the world... well maybe not the world but you get the idea. I've been slacking a bit with my blog. If you've been reading it, you'll know that Dyanna & I only blogged half of our trip and then thru in the white towel. It's kinda hard to blog the rest of the trip from home when the tag team bloggers live 489 miles apart- that's exact...gotta love google maps.  In short... We had a wonderful rest of the trip. We were going at full speed and just way too tired to keep up with the blog. We laughed, we ate, we laughed, we ate & ate some more. We also froze, but had an awesome time regardless. Now that I did a pretty pathetic job at finishing my last blog... I'll fill you in on my next trip. You must be dying to read about it since you've just witnessed some of my incredible blogging abilities. I digress.

My next adventure will be just myself & my parents. My brother & sister-in-law were going to be with us, but my brother's new job threw a wrench in that plan. He missed out by a week! His new job's vacation time kicks in the week after our cruise. Oh, well. There's always next time. This is gonna be a much more relaxed vacation than the norm and I'm excited about that! Lately I feel like I'm 25 going on 60. I think my parents are rubbing off on me. It takes me an extra 3 seconds to get myself up off the couch and it is almost always accompanied by a groan. At the rate I'm going I'm gonna be trying to apply for an AARP card by the age of 30. So rest & relaxation is the goal of this trip. Oh, and of course eating. Eating is always a goal of mine.

We're leaving on Friday morning for Miami. Actually we're flying into Fort Lauderdale & then driving to Miami. It was much cheaper to fly into Fort Lauderdale and just drive the 30 minutes into Miami. Our cruise leaves on Saturday, but we always like to get in the day before. Flying in the day of the cruise can be a risky move. And we all know how I like to take risks. *insert sarcastic eye roll here* Flying in the day of can be very risky because a delayed flight can mean missing your entire cruise. So that's why we like to always head out a day early. We're going on Norwegian Cruise Line's Epic. The ship is HUGE and it's gonna be Epic! I know cheesy... but I couldn't resist. The ship is the main reason we're going. I don't even think we're getting off at any of the three ports of call... which are Cozumel, Mexico, Costa Maya, Mexico & Roatan, Honduras. I've been to Cozumel before, but not Costa Maya. I've read a lot of negativity about Costa Maya and then the whole safety aspect of Mexico these days... I don't know. So we don't have any plans for the Mexico ports. Honduras I have never been to but, again, I don't have any plans there either. Can you see a pattern here?? This is the most unprepared I have ever been to go on a trip. I like it though. Kinda just play it by ear & relax. Instead of every waking second of my vacation planned out and feeling a lot more like work & a lot less like a relaxed vacation. We'll see how it goes.

Now I'll tell you more about this incredible ship. The Epic is the biggest ship I have ever cruised. The ship is 1,068 feet long... that's like 3 football fields! Picture laying the Empire State Building (by the way...my bf "runs that joint" ha!) on it's side and floating it down the Hudson & you'll get the idea of just how big this ship is. It holds 4,228 passengers and 1,690 crew... that's just under 6,000 people!!! Take that Love Boat! It has 20 restaurants, 20 bars & lounges, 3 pools (one adults only...that's where I'll be!), 6 hot tubs, not 1 but 2 bowling alleys, rock climbing wall, rappelling wall, 3 water slides & a ton more. It's insane. It's like a city floating on the ocean. It also has some really cool entertainment like Blue Man Group & Second City Improv Comedy Troupe. It's gonna be a fun trip.

My parents will be in a balcony room, but my room is gonna be the talk of the trip. This ship is the first to offer "studios". Basically rooms even smaller than an "inside stateroom" meant for solo travelers. Any other cruise, when I get a room to myself I have to pay for two people. It's absolutely absurd. So this is exciting. These rooms are tiny! 100 squre feet to be exact. Basically I'll be staying in the shed. I have a window out to the hallway, which is nice since no other inside stateroom has a window. It's gonna be tight though. Before this the smallest cabin I stayed in was just under 150 sq feet, but I was sharing that room with a friend, so we'll see. Also all of these studio rooms are grouped together & you have to have a room key connected to one of these cabins to even access the area. Right in the center of the special "studio area" is a two-story lounge they call "The Living Room". It has a bar, some couches & tables, TVs, etc. They serve breakfast and other snacks in there. Again it's only accessible to the solo travelers staying in the studio cabins. It's a nice touch for people traveling alone to meet other singles. Makes sense. Every night at 5:30 they have a get together of some sort. As well as a white board with get-togethers & meets that people plan once on board. Like a game night, bar crawl, etc. Sounds cool if you're into that type of thing, but if you have a severe people allergy like myself... sounds pretty tortuous. Seriously, I think I took the whole "don't talk to strangers" thing a little too literally growing up & still can't quite shake it. I mean it's basically a room full of strangers offering me free food... isn't that what I was supposed to run screaming from as a child?? Just saying.

So I think that's it for today. I have a lot to do at home and work in the next two days. My next post will be Thursday night or maybe Friday morning from the airport.

Bellow are some pics & video of the ship...

Here's a short video tour of the Epic. It shows both a studio room that I'll be in, as well as a balcony room similar to my parent's room. Enjoy. I love the guys accent. hahaha 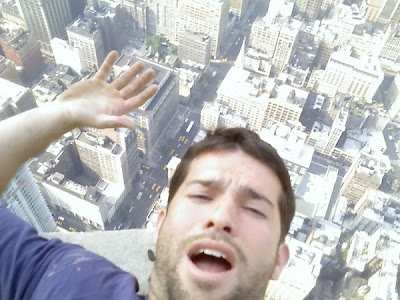 So happy you're back at it!!