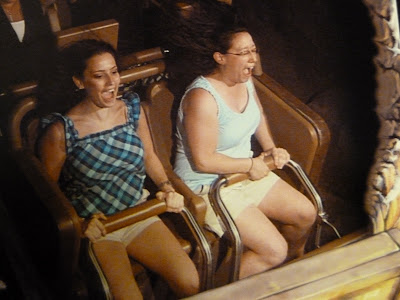 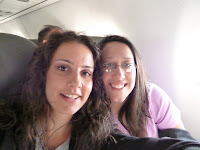 Hello, hello. I'm back for my final NY post! I am so excited! I have had an interesting weekend that, if you're up-to-date on my blog, you will not believe. I spent my Saturday driving back & forth to the VET with Rocky! Yeah, I'm serious. She had an issue with a gland AGAIN and had to have surgery AGAIN. So I was annoyed, angry, sad, etc. on Saturday. I just can't believe all this dog has had to go through in the last 3 months alone. Poor thing. Oh and for those of you keeping track, I'm just under $2,000 in vet bills in 3 months. Ouch! I love my dog. I LOVE my dog! I LOVE MY DOG!!! Now that that is out of the way... Tomorrow is the day! I got everything I wanted to get done done today. Had a great time with my mom, family & friends for mother's day. Happy Mothers Day, by the way! I am as completely packed as I can be, just a few last minute items to pack tomorrow morning. I'll be getting up at a refreshing 4am. We have to leave the house by 4:45am. We'll see how that goes. I have already checked us in, but with how limited HPN (ugh!) is with space, if I remember right we'll still have to wait on the same line to drop the luggage. Yes, I check luggage. If you think this prima donna can make it on even a 2 day trip without a checked bag, YOU'RE INSANE. I just barely make it with the only one bag under 50lbs rule. As of now I'm at 48lbs. As a defense though, I always pack a 12 pack of bottled water. You know, the biggest JOKE americans are addicted to. NY alone has the 2nd best tap water in the country & yet we buy bottled water. I digress. In Fl it's worth it 'cause their water is terrible & it saves money. Plus then I have all that room for souvenirs coming home. Works for me. Well, I think this is gonna be a short one, as it's 11pm & I have to be up in 5 hours! Hope everyone has a great week- I know I will! I hope you all enjoy my blog & hopefully I don't offend too many people. On one last note before I go. I was having a conversation with someone the other day & I brought up one of my major pet peeves that is really difficult for me especially while at Disney. I never really felt like I had any of the typical NYer hang ups, but after so many trips to WDW I realized, I DO. I can't stand, no loathe, when people walk slooooooow & especially right in front of me, blocking the way. I don't mind if you're a moseyer (sp?), but for the love of God, please mosey on out of my way! Move to the side or something. Well anyway, I'm really concerned that this is getting worse & worse with age. I'm getting less & less patient. I happened upon this video & it confirmed my fears. We'll call it, Lisa in 50 years. Enjoy!

http://www.youtube.com/watch?v=KjSwL-9Bzf8
Having issues tonight, you're gonna have to copy & paste it. Sorry.
Posted by Lisa on Sunday, May 09, 2010 3 comments:

Hey everyone. Are you shocked? I'm publishing a new post before I said I would. See I felt so guilty about keeping you all in the dark for so long that I decided to give you a little extra treat. Actually, it's not really a treat. Yesterday I had to make an unexpected 3rd visit to the Vet in a little over 3 months! Poor Rocky had these two boil looking things on her that were obviously painful. So I brought her in and they have no idea what they are, but whatever they are, they are now infected! Greeeeaaaat! So now my little Rocky is on antibiotics and children's Benadryl. Talk about frustrating... try finding children's chewable Benadryl for you dog during a recall. Really? Ever have one of those days where you feel like you're being Punked?! Wow. So I ended up having to go to 3 different Pharmacies to end up with a generic, liquid version. Also, while at the Vet they checked Rocky's "bottom" (anal gland) and it was completely full! They said if she hadn't have come in we would have had to go through the whole procedure again! Ugh! So they... uh.... "relieved" that gland and now she is SOAR. The poor thing has gone through so much. Oh and now they told me, after 8 years of having Rocky, that I will need to now bring her in every 2 months to have her gland issue taken care of. At first I was pretty annoyed, but then I figured I'd rather have to bring her in every 2 months for something little than to have her go through that whole long procedure again. I have to bring her back again when I get back from Disney and hopefully that will be her last unexpected visit of the year! On a good note I was able to try out my new camera. My new memory card finally came today, so I tried it out. It's great, but it looks like when I get back I have to exchange it. There has been reports that some of these models have had sound issues & it looks like mine is one of them. It's not terrible, so I don't mind waiting until I get back to get a new one. The issue is while I record video you can hear the camera zooming in and out. No biggie, as long as I know it will be fixed when I get home. Anyway. I took some video & pics of poor Rocky & made a quick video. I also put some pics from my older camera in there & my cell phone, so please forgive some of the pics with poor resolution.

I need to make some adjustments to my blog, so for the time being this is the link to my video on youtube. I will be changing it so that I can once again post the video directly on my blog. Also remember to watch the video in HD. If you are unsure how to do that... on the bottom right of the video, click on the 3 digit number (usually 360) that is followed by a "p" & choose 720p. 720p is HD.


On a happier note. I read this article and found it hysterical! So I thought I'd share it. You can be sure though that I'll be wiping down the bench of my Pirates of the Caribbean boat. Ew.


I hope you enjoyed this little bonus post. Now. Next post will be my last before leaving NY! Yay!!
Posted by Lisa on Thursday, May 06, 2010 No comments: