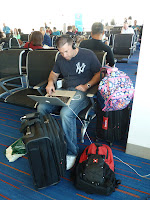 I woke up this morning 10 minutes before my alarm, 4:50am. I actually didn't feel too bad for how little sleep I was on. I got ready and finished up some odds and ends in the hour before my dad arrived. Matt got up a little after me and took care of Bania. We left the house on time and treated ourselves to a bacon, egg and cheese on a hard roll and I also made the wise choice to get an additional item to snack on while on our flight, a buttered hard roll. I tried to get Matt to bring some food to snack on, but he said he was fine. Just like he said he didn't need anything to drink for the ride and we were not even off our street when h realized that it would have been the wise choice to listen to his wife and bring a drink to wash down his breakfast. Anyway.


The drive to the airport went well, no traffic issues or anything like that. Our flight wasn't until 10am, but you can't take any chances with the morning rush hour possibilities. Once at the airport, JFK, we had no line at the Hawaiian Airlines desk. (*cough*Matt's bag was heavier than mine*cough*) The security line was a little long but it moved pretty quick. After security we made our way to our gate to find a seat, but not before stopping at the newsstand to buy Matt a small deodorant for on the plane because, "he's a man!" whatever that means. They boarded the plane from the back to the front, we of course were in the front so I was a little worried about overhead storage space, but once on board we didn't have any issue. We were in a row of two seats to ourselves and made ourselves at home pretty quick.  Our plane took off at 10:25am so only 25 minutes late. I really like Hawaiian Airlines. They had a pillow and blanket on each chair waiting for us, no charge. Their entertainment options were really good, although the "unlimited package" isn't very informative. Matt & I have been watching 24 on Netflix from the beginning since Matt never got into the show and we've also been watching Arrested Development, I had never gotten into that one and Matt really enjoys it. Well, on the unlimited package it showed 24 and Arrested Development, but it wouldn't tell you how many episodes or which season. We asked the flight attendant and she had no idea, so we bought the unlimited TV & Movies Package only to find out the it was only 3 random episodes each. It wasn't a total waste since they did have two movies on that package that we were interested in. Where we really enjoyed ourselves was the "On Demand" new release movies. I finally saw the final Twilight movie (don't judge me! I can feel your judgement) and Matt finally saw some weird sic-fi movies that he's been dying to see, Life of Pi and something Atlas?. I don't even know. We also played some games that came with the unlimited package, Battleship & trivia that made me feel like a complete moron. Thank you Hawaiian Airlines. 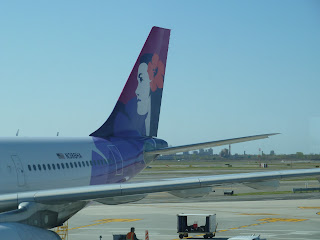 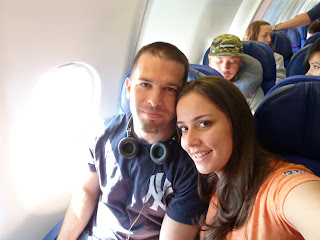 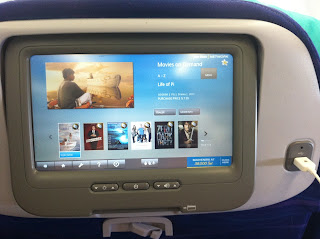 We each only slept at the most an hour while on the plane, bringing our sleep totals to right around 5 hours each. Hawaiian Airlines offers complementary meals and I was impressed, for the most part. They served us a drink and trail mix once we were in the air, a little while later they served us lunch, then our movies were suddenly interrupted with the cutest video of dancing, singing concession stand items, just like you see at the old drive-ins, announcing that the "snack bar" in the galley was open. The snack bar remained "open" the rest of the flight, which had complementary drinks and snacks as well as the fancy snacks & drinks for purchase. A bit later they offered us a fruit and cheese plate which really hit the spot. There was complementary food & drinks and then premium snacks, meals and drinks for a charge. The announced they were taking lunch orders and of course told us about their $14 upgraded lunch but we thought their regular meal would be fine. Whoever thought that serving people flying out of NY "pasta with red sauce', that's what they were calling it, was a good idea obviously was NOT from the NY area. Ugh. I immediately wished I had upgraded my meal when they announced the pasta had "marinara sauce", before even laying eyes on it. I have the best Italian mama on the planet, who cooks like no other. So I am very picky when it comes to "Italian". Other than that monstrosity I was really impressed with their quality.  They even served complementary red and white wine with our Chef Boyardi. Everything they served was an American product and good quality. Lots of Hawaiian items too. Chocolate covered macadamia nuts, shortbread cookies, Kona coffee & all the POG juice you could want. (Passion fruit, orange & guava juice blend. Hear that? That's angeles singing as I type, "POG". I feel like the flight went pretty quick. The last 2.5 hours was the doozy. That was the longest part of the flight. Oh, and remember Matt not needing any snacks on the plane. Ha! Guess who was upset he didn't listen and bring some snacks on board. 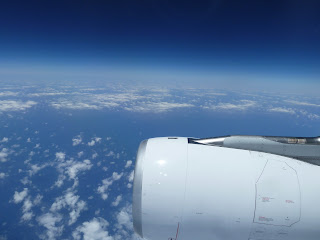 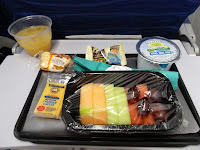 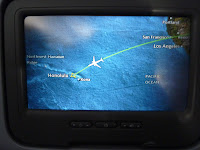 The flight was really smooth and we actually landed 40 minutes early. I had surprised Matt with a lei greeting, so our first sight off the plane was a sign with our name & two beautiful leis. The girl that greeted us took us thru a short cut to baggage claim and then once we picked up our luggage she escorted us to our rental car shuttle. She was very sweet and the shuttle driver was also extremely friendly. There was quite a crowd at Enterprise but it went quick and before we knew it we were in our convertible (surprised Matt with that one) headed for our hotel with a malfunctioning GPS and no idea where we were going. 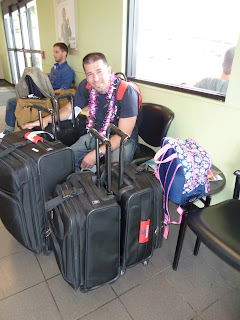 I was panicked. I could not get the thing to work at all. Add on top of it that I'm exhausted and have put all kinds of pressure on myself to make this trip amazing and my biggest tool in our vacation, our gps, is not working. I fidgeted with it most of the way while googling directions & sharing them with Matt while trying to not have an over-tired meltdown. Matt of course was obnoxiously happy , which normally I'd welcome with open arms, but while I was panicking was not the time to be singing, "Celebrate Jesus, Celebrate" sirca 1995 at the top of your lungs in a convertible while your wife is rapidly self-distructing. He was trying to help and make me have fun, but I was way too tired and way to tightly wound to enjoy. Hello, OCD, perfectionist, worrying, type A, Lisa. I was a mess. I never got the thing to work, but we ended up getting to our resort without any issue, well except my issues, but that was gonna take some serious sleep & one talented physiologist.

So we get to the resort, one near meltdown has now been slightly averted. It was close. We pull in and the resort, Disney's Aulani Resort & Spa, is just breathtaking. The valet area, however, is a zoo. Valets running everywhere, packed with cars, etc. The valet couldn't even hold a conversation with us without yelling at incoming vehicles every few seconds. It was not the relaxing Hawaiian resort I had pictured. No biggie though. So we leave our car with the valet and the coolest bellman comes for our luggage and he was a Yankee fan, but I loved him and will be filling out a comment card in his honor. He then escorts us to a Cast Member who welcomes us by name with a flower lei for me and a nut lei for Matt. What should have happened next, was the lei wielding woman should have handed us our welcome packet and room keys, given us a tour of the lobby and then sent us on our way since I had done online check-in. That did not happen. She brought us to the even more chaotic front desk to wait online to check-in. I mentioned to her that I had checked in online days ago, but it didn't seem to move her. So we finally get up to the deck and the guys starts the entire check-in process. I explained to him that I had already done all of this online, but he couldn't find any record of that, even though I had the confirmation email. Okay, fine. Not a terrible thing. So we go thru with the normal check-in process and then we head for our room, an ocean view, studio. We get up to the 10th floor and before walking in, I already am disappointed. (that's putting it lightly, sleep deprived, table for one) I had called and requested weeks ago an ocean view room on the pool. The ocean view I paid for, the request was to be on the pool as well. I have never been to a Disney Resort and not gotten my requests. They've kinda spoiled me. Our door was on the wrong side. So we open the door and find a small studio and I head straight for the balcony, which is also very tiny. What do I see? A parking lot! Our view looking straight ahead was a parking lot & the neighboring resorts and if I turned my head to the right & leaned forward I could see the ocean. Enter the waterworks. That was it. That was all my sleep deprived, perfectionist self could handle. Matt was sweet and tried to convince me that the view was fine, but he even admitted later how crappy it was. I was just going to suck it up, but then decided that I felt it was worth a shot to go down and talk to the front desk. You know, be one of thoooose people. Only problem was, I was struggling not to cry just standing there let alone any time I tried to start talking about it. I sounded like a six year old girl who just had her Barbie stolen. I juts kept telling Matt, "I know I'm overemotional about this. I'm just tired." I could not keep it together and really didn't want to cry over my room to a cast member at the front desk. So I went down & asked if there was any room with a better view. I told him how I had called months ago & put in a request to be on the pool, etc. He didn't bat an eye and in less than 2 minutes I had the room I had requested from the beginning. It was pretty clear that my entire reservation somehow got overlooked. Not the way you want to start your vacation, but it all worked out. 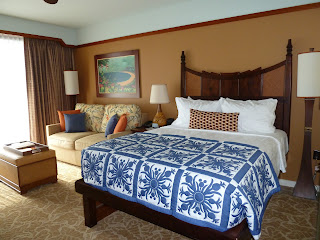 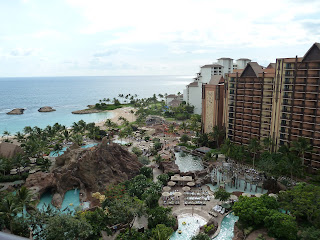 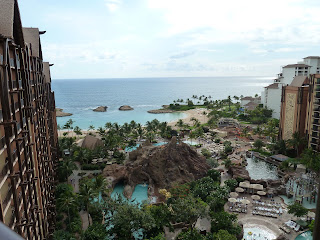 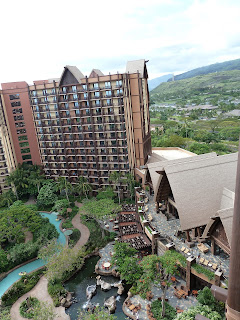 Once we were in our new room, we called for our luggage, took some pictures of the room, then headed down to the buffet here at the resort. By the end of our meal we were pretty zombified, but wanted to walk around at least a little bit to see the resort. We made it one lap around the pool and that was it. We headed to the room for showers and bed...well, for Matt. He's snoring away as I type this.

Pictures look great...sooooo proud you went to the front desk...exactly what your mom would have done - probably without the tears and kindness you probably showed!!!