Final Day... only a month later.

Hello world! This is your terrible blogger back after a month hiatus. There are no excuses, but I'm gonna give em to you anyway. Because I can. So returning home in the middle of a work week, was my first strike against me. Add on top of that, that June is always my busiest month at work. Then I was waiting for my Photopass CD to come in to share some of our other photos. Then I got sick & I mean sick! I won't get into details, but I was puking my guts out! Too much?? Next I lost my right arm in a freak accident. Turns out chain saws are sharp! Who knew? Then a tree fell on my house, only hitting my bedroom. Then there was the great astroid strike of 2010. Then Father's Day. Oh, and then I ran 5 marathons. Then some idiot hacked into my iTunes account, locked me out of it & bought $125 worth of music on my credit card! Ok, I'll stop. I'll just wrap up our final day & then starting tomorrow I'll be back to your regularly scheduled programing, 'cause my big Europe trip is coming quick! 82 days and counting!!!

So our final day we had to be out of our hotel room by 11am. We decided that we would spend the day at Downtown Disney and Disney Quest, the 5 story arcade. So we got up, packed and were out of our room by 8am. We brought our luggage down to the lobby and checked-in for our flight. I love Disney. They took our checked bags and then we left our carry-ons with bell services. We headed out to get our bus to Downtown. Once we got to Downtown Disney we had our final meal on Disney property and boy was it good. (There are pics on my photo website.) I think it was both of our favorites from the entire trip. I got waffles with whipped cream & fresh  strawberries. Kristin's took the cake though. Kristin got corn flake crusted french toast that was also served with fresh strawberries & whipped cream. HOWEVER her "french toast" was actually three bagel halves! Breakfast was to die for! If you are ever at Downtown Disney in the am head straight for Wolgang Puck EXPRESS on the Marketplace side, next door to the Christmas Shop. Don't, I repeat, don't, ever eat at the other Wolfgang Puck restaurants on the West Side by Disney Quest. Although they are owned by the same people they are totally different! It's like good and evil. I only suggest going to the other one if you are doing research on how to run the worst restaurant in the history of the world. Seriously. I digress. After our wonderful breakfast I got stopped by a life-sized Barbie doll originally from NJ, but now unhappily living in Fl. This woman overheard me talking to the cashier that we were headed back home to NY & when she heard that she literally jumped me. By the end of our conversation I was confident that I would find her stowed in my luggage. It was the most interesting conversation I have ever had with a stranger. Probably, because it is the only conversation I have ever had with a stranger, (people allergy remember?) but who's keeping track? The conversation was all about how much she wants to live in NY & how she HATES living in Fl but her former NYer husband does not want to move back. Then the conversation somehow took a strange Dr. Phil turn where she was telling me how great I was and how she could tell just talking to me how I had good morals & that I would find a husband with the same morals & same love for living in NY. Then she shot a look at her husband. You know, one of those, "why did I marry THAT??" kind of looks. Kristin & I took our cue to get the heck out of there before it turned ugly. It was strange, but I'll take compliments any way I can get them, so I just sucked it up & stabbed myself with my Epi Pen & I was good. Next we did a little last minute shopping. I found a great book for my big Disney cruise coming up. It's a scavenger hunt of all the hidden Mickeys on the ship. If you have no clue what I'm talking about, check this out, Hidden Mickey?. They sell books on this stuff! It's very addicting and you'll never be able to walk through Disney World or any other Disney property the same. Actually, you'll start seeing Hidden Mickeys everywhere! You'll see. After our shopping time we headed to Disney Quest and played all kinds of video games. Kristin even got me to play Guitar Hero. She tells me I did really good for a beginner, but I could of been the world's worst Guitar Heroer and how would I have known. She's good. Next we played some old school video games, air hockey, etc. After we had enough of our 14 year old boy moment of video games we headed to the bus but not before getting Kristin a Doh-Bar and spending all of our left-over snack credits at Goofy's Candy Company. YUM! We took the bus back to our hotel, picked up our carry-ons, changed into jeans and then sat for about 45 minutes in the lobby reminiscing until it was 4:30pm when our Magical Express bus was arriving to take us to the airport. Sad. We got on the bus for the 30 minute ride to the airport and watched a little cartoons, followed by a Farewell Video from Mickey & the Gang. We got to the airport and bypassed check-in, I love Disney, and headed straight for security. That was pretty effortless. We had dinner at the best place on the planet, McDonalds. No sarcasm there, that is literally Kristin & I's favorite. No addiction! After dinner we sat at our gate and stalked the most adorable guy on the planet. He was so cute. Kristin & I were mesmerized. We were really excited too, because it appeared he was a fan of Disney World. Nothing like a guy secure enough to love Disney World. We were staring so much that he noticed & started to smile back! We really got his attention and when it was finally time for us to board our plane he tried to escape his stroller to come with us. Come on people, I don't pick up men in airports. Remember? I have good morals, says Barbie. The storms that I had been worried about were there on & off while we waited for our flight but by the time our flight took off they had passed. Our flight was pretty uneventful. We landed in HPN (don't get me started again!) got our luggage and then went home to bed. Kristin spent the rest of the week sleeping in and recovering from our trip, while I got right back to work the next morning. What a brat!

It was a great trip! They say if you can vacation with friends, they truly are your friends. I think after this week, Kristin & I realized that we're not friends, we aren't like sisters, we're clones! We lost track of how many times one of us would say something and then the other would say, "I was just going to say that!". It's crazy when you meet someone so on the same page as you, but if you do you are truly blessed! Kristin is such a blessing in my life & I am so grateful to have her in my life! Kristin & I will be vacationing again together soon. Our families are going on a big group cruise next summer & she will be rooming with me. She will have just graduated college and has no clue what will be in store for her by then, but we're not giving her an option. She's going! So stay tuned for more Kristin/Lisa insanity! Also, as soon as I post this I'll be headed over to upload the last of our pictures as well as our photopass pictures, so be sure to use the link on the left to go to my photo website. 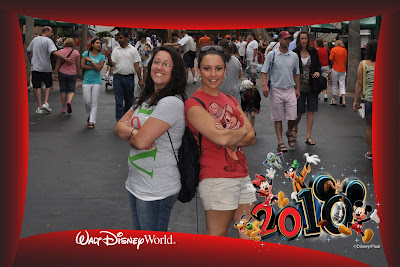 Welcome back Lisa!:) As usual, NEVER disappointing!! You satisfy your fans EVERYtime!! I AM your biggest fan!:)XOXO