I'm back... but here's a warning for yah, I am overwhelmed & exhausted. Work has been insane. I have a major deadline coming up the week before we leave for the trip. I have been working 5-6, 12+ hour days a week, on my feet & my brain feels like mush. So I'm hoping this post ends up even making sense. 26 days! I can't believe it. It's coming quick but I'm feeling good about the trip, it's just work that's freakin' me out. Yesterday I received our cruise documents. Very exciting. All that really means is that our trip is close & I have my luggage tags. Really not that exciting at all. But when you've been planning a trip for almost two years & you receive this package it's like Christmas morning... or for my Jewish readers, like Hanukkah. I'm not Jewish so I don't know, but I can't imagine a person could be that excited for all 8 nights. I would think it would start to die out a bit after maybe night 3? Especially if the "gift of the holiday" is a dreidel... and that song. Okay, so maybe not the best metaphor but work with me, I'm trying to be all things to all people. I digress. Since my last post I haven't bought much of anything. I figured out that I do not need a converter at all, since the only thing that would need it is my blow dryer, however, I have a travel one from Walmart that has a switch right on it to convert, so I'm good. My parents are going to need one, since my mother is a coffee addict & she doesn't travel anywhere without her travel coffee pot. Yes, she's even brought it on all 9 of her cruises & has never had a problem. So they'll definitely need one & I still have to see about my father's CPap machine for sleep apnea. We have other odds & ends to finish up but really, there's not much. THANK GOD!

Day 3 & 4. Sept 15 & 16
Our second day in Ireland (3rd day of the trip) we'll head to our tour meeting spot for the day. This is a full day tour taking us to some of the popular places in Ireland, Wicklow Mountains, Wicklow Gap, Powerscourt, Glendalough, Blessington Lake & the filming locations of movies like Braveheart & P.S. - I Love You, among others. The tour leaves at 10am & we get back about 6pm, so it's a pretty full day, to say the least. Once we get back, we'll be having dinner at a restaurant about a 5 minute walk from our hotel. After dinner I'm pretty sure, we'll crash at the hotel. On our last day in Ireland we'll be getting up early for a big, traditional breakfast at a restaurant about a three minute walk from our hotel. They have an "award winning full Irish Breakfast", which to be honest has me a little scared. Bacon, eggs, sausage, mushrooms, hash browns, (we're doing good) beans (oookay), toast and black & white pudding, which isn't pudding at all, it's sausage (uh, oh!)."  Looking forward to that. Then we'll be seeing Dublin via the hop-on-hop-off (HOHO) bus. But after breakfast, we'll be heading by taxi straight to Kilmainham Gaol (jail) to get the first tour of the morning, as this is a very popular place & I want to be sure we see it. It was Dublin's jail from 1796-1924. After our tour of the jail we'll pick up the bus & see as much of the rest of Dublin as we can. This was a very hard trip for me to plan, 'cause there is SO MUCH to see in Dublin alone, let alone the rest of Ireland. I'm definitely going to have to go back some day. On this day we'll be trying to see Saint Patrick's Cathedral, Christ Church, Dublin Castle & Trinity College. Trinity College also houses the Book of Kells (4 gospels of the New Testament written in the 6th-9th centuries) which is what everyone says you have to see when in Dublin, but I just don't think they'll be any time. Plus, I've been to Israel. I've seen the Dead Sea Scrolls, the tomb they believe Jesus was buried in, among many other things. I just can't see spending 45 min+ to see this when there is just so much to see in one day. So we'll probably just end up walking around Trinity College. After that whirlwind of a a sightseeing day, we'll head to Temple Bar for a traditional Irish Dinner to end our wonderful time in Ireland, but we'll be back! After dinner we'll do some shopping though, 'cause a girl's gotta shop & in Ireland Thursdays most shops stay open until 9pm. And it just so happens that our restaurant is close to the most popular street for shopping. Some planning, huh? My poor dad.

Well, that's it for Ireland plans. It's so exciting! I can't wait! Below are some pics of some of the sites we'll be seeing as well as the breakfast with the "pudding". Um, in America our pudding usually comes in chocolate or vanilla flavoring. If you're adventurous you go for the rice or even tapioca. Just sayin'.

Powerscourt, Glendalough & breakfast. Not too many pics... gotta keep the anticipation. (click to enlarge) 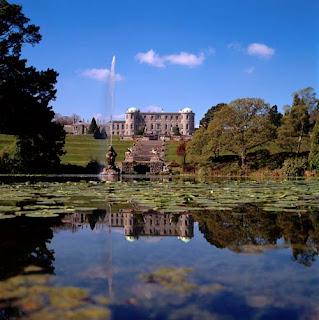 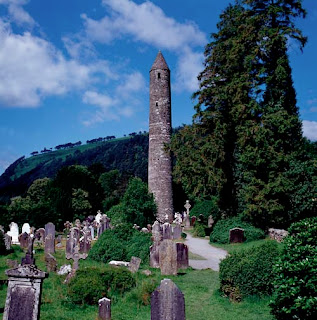 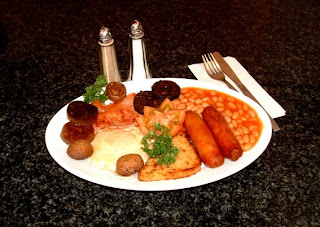