What a week this has been, specifically Wednesday night! You're talking to a TV star who rubs shoulders with the Jonas Brothers & the rest of the cast of Camp Rock 2. I bet you didn't realize you were reading such a prominent person's blog. I should start charging admission for reading privileges. Okay, so maybe I'm going overboard just a tad... a little over exaggerating never hurt anyone. Too bad I'm exaggerating A LOT. I'll just explain. On Wednesday evening I managed to get two tickets to South Pacific on Broadway. I am a huge broadway fan. I've seen 21 shows, plus five of those I've seen 2-3 times each. I love Broadway & specifically South Pacific. It's one of my absolute favorites. So anyway, South Pacific is closing on Sunday. When this announcement came out I immediately went to buy tickets to see it one last time. I also wanted to be sure I saw Paulo Szot. (oh heavens!) There's always a possibility that you could go on his night off or if he gets sick, etc. and miss seeing him. So I e-mailed the box office to see when his scheduled day off was. (I'm not seeing this show one last time with any understudies) So I heard back that it's Tuesdays. Great. Then I hear that pbs will be airing South Pacific Live from the Lincoln Center. I knew on such a rare night as that there would be no way any understudies would be used. I mean we're talking live tv. I was lucky enough to manage to get front row mezz for the live broadcast which was Wednesday night. If you'd like to see it, they are re-airing it. In my area you can see it again on Sunday at 12:30pm, I think. The show was great as always & now I have it on dvd, since I recorded it on my Tivo which is on my wireless system, therefore on my computer. So exciting! So I was on tv! No, you never technically see me, but it's my blog so I can spin it however I like, sooooo... I'm a tv star!  It doesn't end there though. It just so happens that the movie Camp Rock 2 (I have no idea, apparently it's Disney. Some fan I am.) was having their premiere at Juilliard which is at Lincoln Center, where South Pacific also plays. So as my mom & I are walking up to the theater we hear all kinds of screaming. We assumed it was stars for tonight's live broadcast. Nope. We took a couple more steps & there was the Jonas Brothers standing 30 feet from us. We had a perfect unobstructed view of them and the rest of the cast (I had no idea who they were. I feel so old) as they each walked the red carpet. Now, I am in no way a Jonas Brothers fan, but after that night of luck, I felt like I should leave straight from there to play the lottery. Who just happens upon a red carpet with a great view, on a night where you were able to get tickets to a show that should of been impossible to get, let alone the seats we got?!?! Wednesday was my night, to say the least. Okay, so enough bragging. On to the plans.

Day 5 & 6. Sept 17 & 18.
Day 5 is gonna be an early one, to say the least. I'll be starting my day at around 2:40... AM! Today is the day we fly from Dublin to Barcelona. We are flying Aer Lingus & there was only 2 options for a flight, first thing in the morning or late in the evening. Obviously we would go with first thing in the morning. Too bad I forgot to figure in that I'd have to be at the airport 2 hours early since, we're still flying international. Oops! So our flight leaves Dublin at 6:40am and we arrive in Barcelona at 10:10am. The flight is only 2.5 hours but Barcelona is an hour ahead of Dublin. I am pretty sure we'll sleep on the plane. Once we land I have a private tour picking us up. Originally I was just going to get us a cab to the hotel, check-in & then take the hoho bus to sightsee for the day. Then as I got thinking about it. With the fact that we're gonna be slightly tired, it's a Spanish speaking country & we really only have one day in Barcelona for sightseeing I got us a private tour. It's perfect. The tour will pick us up at the airport at baggage claim, so they'll help us navigate the airport and our luggage. Then we'll be whisked away on a 4 hour guided tour of the best of Barcelona. They will keep our luggage in the car the entire time so we won't have to waist time stopping at the hotel. Once the tour is over they'll be dropping us off at our hotel at around 3pm. We'll check-in, take a nap and then that night I planned a special dinner for us. We'll be going to a Flamenco dinner & show. I had planned for us to go to a show that was about 30 minutes from our hotel & it a much more extravagant experience, complete with an old spanish village, but I just felt like after an already long day, I didn't want to have to deal with cabs, etc. So I found the second best one in Barcelona, which happens to be only a few blocks from out hotel. Score! This company actually travels the world and has actually been here in Madison Square Garden, so I'd say we're definitely gonna get a treat. The dinner starts at 7pm and then show show is right after that, so we'll have time before to stroll Las Ramblas, one of the most popular areas (street) in Barcelona. After the show, we'll walk back to our hotel and get to bed already! The next morning we'll be getting up and taking a taxi straight to the port to board the Magic!! Which is exactly 4 weeks from today. Just a little excited. The port opens at 10am, so we'll be there around that time. We don't board until around 12pm (every cruise says boarding begins around 1pm & they all start at around 12pm!) but there is so much excitement we always get to the port at opening. We'll check-in, the characters will come out for pics & then next thing you know, we're boarding!! Once on board, we'll head straight to the buffet that has outdoor seating (if the weather permits) and we'll have a nice relaxed lunch overlooking Barcelona to start our 14 day cruise across the Atlantic! Florida here we come! The only other plans we have for that day is to start our cruise with a bang. The Disney ships have an adult only, Italian restaurant on the top deck of the ship with panoramic views. We decided that we wanted to start our cruise eating there. Plus, we always hate not eating in main dining, 'cause we feel like we're missing something if we're not there. The first night's dinner is always never anything to write home about & it's always chaotic. So the first night is perfect to head to Palo. The dress code for Palo is a little dressy, so back at the hotel in Barcelona we'll iron our semiformal wear & then pack it in our carry-ons that have a garment bag built in. Luggage could possibly not make it to your stateroom until 6:30pm , which is our reservation time, so we'll be sure we have it in time by carrying it with us that day. After our amazing dinner I'm a little torn. I want to go to the theater to see the show, which is always a bunch of short acts by all the entertainers you'll see on the cruise. Kinda like live coming attractions. I really want to see it so I'll know if the comedian, etc, is worth seeing, but it will be right around sail away, which I really want to see! I'll probably skip the show, since they air it again on the stateroom tvs, but knowing me, I'll never watch it. Hey, if that is my biggest problem of the day, I'd say I'm pretty lucky. I mean it could be worse. I could be home, reading a stranger's travel blog, bored to tears. Love you guys! So that's it for day 5 & 6. I'm getting so excited!

Pics of some Barcelona sites & a small taste of the Flamenco show we'll be seeing. I know, it's been a while since I shared a video... so I'm gonna share two! The second one is from on board the Magic when it arrived in Barcelona back in April. Disney put on a fireworks production for the people of Barcelona to announce the arrival of the Disney Magic. I'm sure the guest onboard believed it was for them, but let's say it together... ADVERTISING. Disney does everything 100000000000000%. Can you think of any other cruise line that does a fireworks show just for the arrival of a ship. Seriously. Enjoy! 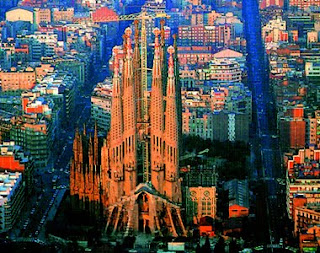 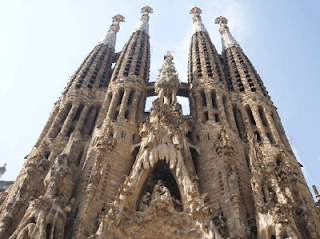