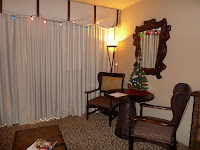 Day 1: Today is day one, but really day 3 for me. I arrived bright and early on Sunday morning and spent the next two days taking it easy & recouping from the crazy last two months. I basically did nothing and ate so I won’t bother  you with the mundane details. I ate, slept & shopped basically. I will note that when I arrived to the hotel on Sunday my room was ready at 10am!!! That’s unheard of! The cast member couldn’t even believe it! I also got to spend some time with my awesome aunts & enjoy the sights at the new Italian restaurant. We also ate while we were there, but who pays attention to the food in the Italy pavilion?! Okay, so enough about that. Now onto the real trip. You are going to be treated to a special first for this blog... tag team blogging. Dy’s going to jump in at times. When I’m talking it will be in red. Yup, when I speak it’s written in red. I’m THAT good. When Dy speaks it will be in green. We actually decided this as Christmas colors and only after the fact realized that I would be the “red letter edition”. Oh the power. Please send all your gold, frankincense & myrrh to Yorktown Assembly of God, Attention Lisa Foster. Without further adieu... our live trip report.

I (lisa) started the morning at about 8am. I got up, fixed up the room and then decorated it for Christmas. Yes, I decorated. Tree and all. I’ll post pics. After I was done decorating I headed down for some lunch. I had a chicken flatbread which was good but left an interesting aftertaste aka garlic breath. Hurray! I headed back up to the room and did some final touches and then headed down to wait for Dy’s Magical Express bus. 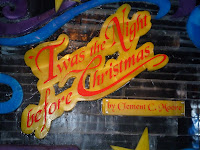 Shooting out of bed at 5:16 in the morning, away to my cell phone I flew without warning, tore open my car door and grabbed all the cash, when, what to my wondering eyes should appear, my flight was delayed a whopping year (actually 2 hours, but that doesn’t rhyme). When the pilot arrived so lively and quick I knew in a moment it must have been Tink (erbell). And off of the plane in a rush I did come, and whistled, and shouted, and yes, even hummed, “Now, Happy! Now, Sneezy! Now Doc! And Sleepy! On, Grumpy! On  Dopey! And Bashful! I’m bleeding???” Into the bus, I got to my phone and thus we began the texting tone.
If you think for a second I can follow that, you’re sorely mistaken. I am more of the complain & whine type, while Dy is more the, “think positive” blogger. If my plane was delayed & I woke up that late, after only two hours of sleep, this blog would very quickly become evident it was written by a typical, miserable New Yorker. Just sayin. Once Dy landed she began to text. I could tell the excitement was at a level 10- she didn’t give me time to respond to her text before she had already sent another one. I couldn’t keep up. Thankfully we have unlimited text. She gave me the exact play-by-play of her trip from the airport, including mph. 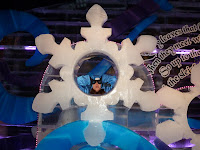 And what did she do when I got off the bus?  but pushed me away in a big NY rush! Where did she bring me one might just ask?  Back to the tundra in a freezing blast.  I came from MI where it was 30 degrees.  Came to Orlando with a nice warm breeze (80 degrees).  Shoved in a cab and off we went to freeze (in 9 degrees). 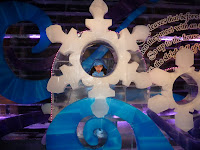 What Dy is now rambling about is that I took her over to Gaylord Palms Resort to see their Ice display of “Twas the Night Before Christmas”- thus her jolly rambling. Ho, ho ho. It is housed in their convention center that they keep at 9 degrees. They issue you a giant, full length, blue parka to wear. I knew I was in trouble when Lisa handed me gloves & ear muffs. It was stylish to say the least. We explored for about 20 minutes before we threw in the white towel & sought warmth. Although, before leaving we did go for a ride on the slides made out of ice. The most interesting part though, was before we even left for “Ice” when the Magical Express bus driver drove off with Dy’s carryon after we told him that it was still under the bus. As he drove off Dy & I stood in the middle of the street with our jaws on the ground stunned. We literally said, “We need her bag.” he looked at us, shook his head & then drove off. The valets witnessed this, also in disbelief, and helped us to retrieve her bag while mocking her poor driver. 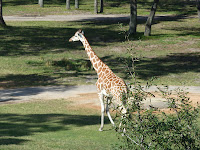 Now that Lee told you about the Night before Christmas episode - I feel no need to continue in verse. Walking into the Animal Kingdom Lodge - Wow!  What can you say?  Than to walk into the room - I saw the christmas decorations and just started screaming!  You would have to know me to understand that one.  What a tour.  We walked on the balcony to see a zebra, giraffe, and an african dear esk thing...oh - and the african cow...long story...Lisa put up the cutest little tree!  Disney ornament and everything!  AHHHH!  I love our room!  And I decided since the room was so decorated for Christmas - we needed to make an announcement...LISA’S 25th BIRTHDAY PARTY HAS BEGUN! 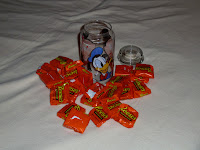 Yes, Dy feels that we need to celebrate my Birthday during our Christmas Extravaganza. Yup, we are celebrating MY birth on our Christmas trip when I’m blogging in red letters. You can’t make this stuff up. In honor of my Birthday, Dy bestowed upon me a tiara & scepter that I have to wear at least one day of the trip. THAT should be interesting. She also gave me 25 reeses peanut butter cups all shoved into this little jar. It looked very appetizing... until we ate like pigs at Boma. Then the sight & smell of them literally made me want to hurl.
The reeses is a long standing tradition between Lisa and I.  However it usually comes in the form of ice cream sundays from Friendly’s.  Anyway.  Dinner at Boma - the African buffet in our hotel.  Yum!  I have to say I’m not a big soup person, but they pulled out this chicken corn porridge soup that was "fly down here to try some" worthy. I thought porridge and soup were words that could be used interchangeably...apparently not. Lisa loved this spinach corn meal side. Oh good beef.  You would think we were guys with how much time we spent in the restaurant. 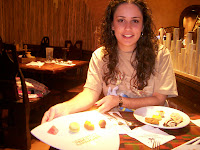 After our amazing meal, they practically had to roll us out of there. I was about to unbutton my top, pants button when Dy comes up with a great idea... “Let’s put on swim suits & go in the hot tub!!” Suuuure Dy. I feel like 2 ton Tessy (Dy says Free Willy,, but that’s not Disney so I don’t approve. Not that 2 ton Tessy, whoever she is, is in fact Disney) & you want me to put on a swim suit! Great plan. So after our amazing dinner and one Birthday dessert that nearly killed me, Dy warned me about the dessert AFTER THE FACT, we headed to put on spandex. Hurray!
How could I not respond to that!  The Boma folks were so excited it was Lisa’s 25th b-day (a month and 1/2 ago!) they brought out a special dessert for her that was no where to be found on the buffet!  Was it my fault it was a ginger gummy tower.  It was a cultural experience for her....she actually did really well!  She tried a lot of new fabulous things.  And now she’s laughing at me.
Everything I had at Boma was very good except the Death Gummy and this terrible “salad” that literally felt like I was eating cold, day old throw up. Really. No joke, it tasted TERRIBLE!
And to that I say the hot tub was well earned!  Good night!

Remember to check out all our pics at my picture website. The link is at the top.